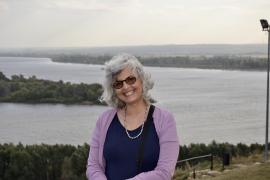 Since 01/01/2004 University researcher in Slavistics at the Catholic University of the Sacred Heart of Milan.

Since 01/09/2007 Professor of Russian Literature at the University of Parma.

Since 01/10/2019 Coordinator of the University of Parma's University Evaluation Board.

- She has been consultant of the Catholic University Centre of the CEI for the evaluation of scholarship holders for the area of competence.

Her researches have so far moved along the following lines:

-  the link between poetry, aesthetics and religious thought in Russia at the beginning of the 20th century, with particular attention to the figure of Vjačeslav Ivanov.

-  the question of language and its particular importance in Russian culture from the Tenties onwards: the figure of Gustav Špet and his “formal philosophical school of philosophy”, developed around the GAChN.

- Russian identity and the relationship between Russia and Europe, in particular the history of Russian nobility and its origins.

- The writing of the self and L.N. Tolstoy’s Diaries.

Author of over a hundred publications, including four monographs, she has participated in dozens of invited international congresses as a speaker (Germany, Austria, Hungary, Russia, France, England...).

- Since January 2010 she has been participating in the research project of the University of Bochum "Die Sprache der Dinge. Philosophie und Kulturwissenschaften im deutsch-russischen Ideentransfer der 1920er Jahre". http://dbs.rub.de/gachn/index.php?pg=17&r0=3&r1=24&l=de

- She has been a founding member of the COLAB Interdepartmental Centre of the University of Parma for the application of new technologies to the humanistic field and for the promotion of digital publishing.

- She edited the Russian section of Garzantina Letteraria.

- Between 2006-2007 she collaborated, for the Slavic area, on the study project "Person and personalisms of the 20th century", promoted by the International Jacques Maritain Institute.

- - She collaborated in the project "La letteratura europea" directed by Piero Boitani and Massimo Fusillo (at UTET publishing house).