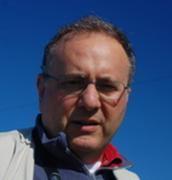 Born in Bologna (Italy) on September 1st, 1959, graduated in Geological Sciences at Bologna University on 1983, he joined Agip S.p.A on 1986, working in the Sedimentology Unit.
Researcher at the CNR Institute of Marine Geology from 1990 to 2000; in this position he participated to several scientific projects and cruises on board of CNR research vessels in the Mediterranean Sea as scientist and chief scientist.
Since 2000 he is Full Professor of Geology at the Earth Science Department of the University of Parma (Italy) (currently Earth Science Unit of the Chemistry, Life Sciences and Environmental Sustainability Department).
Main research interests concern the sedimentology, physical-stratigraphy, palaeoceanography and palaeoecology of Neogene Mediterranean deposits, with particular attention to the problems related to the Messinian Salinity Crisis and more generally to the terrestrial hypersaline systems, to the climatic control on high frequency cyclicity of sedimentary successions and to the relationships between tectonics and sedimentation in syn-orogenic basins.

In 2006 he was among the organizers of the RCMNS Interim Colloquium "The Messinian salinity crisis revisited" held in Parma on September 2006.

From 2005 to 2008 he was President of GeoSed, the Italian Association of Sedimentary Geology.