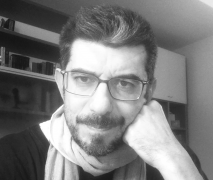 Prof. Andrea Lasagni, Associate Professor in Economics at the Department of Economics and Management, University of Parma. His research activity is related to the study of firms heterogeneity, firm growth analysis, immigrant entrepreneurship, intangibles assets and firm performance.

RESEARCH ACTIVITIES AND PUBLICATIONS Research interests:
1) years 1996-2002: analysis of international trade flows and anti-dumping and non-tariff trade policies After the discussion of the degree thesis, I started the collaboration with prof. Fabio Sdogati and Salvatore Baldone of the Department of Economics and Production at the Politecnico di Milano for the development of research on the characteristics of international trade flows for Italy and European Union member states. In addition, I was responsible of updating the COM.INTERN database. In the first semester of 1998 I was a guest of the CERGE-EI (Center for Economics Research and Graduate Education), a research institute of the Academy of Sciences in Prague (Czech Republic), thanks to a scholarship/research (fellowship) of the European Union (Phare-Ace project). The specific objective of the research, whose scientific supervision is entrusted to Prof. Alena Zemplinerova (CERGE-EI), is the study of the characteristics of foreign direct investments made by Western companies in the Czech Republic to evaluate the possible effects of this phenomenon on commercial specialization of the country. The research report is entitled “A study on the correlation between the dynamics of foreign direct investment and emerging patterns of trade between the European Union and the Czech Republic”.
2) from 2006 to 2011: quantitative studies on territorial economies and measurement of socio-economic phenomena; the spread of ICT activities in Italy: the relationship with the geographical structure of the manufacturing sector and the topic of entrepreneurship. Appointment Researcher at the Faculty of Economics of the University of Parma (1 December 2005). Research themes related to local development and the role of institutions (together with Fabio Sforzi) and in-depth projects on collective action between companies together with Alessandro Arrighetti. For the ICT-territory research area: the publication of "Agglomeration economies and employment growth: new evidence on Information Technology sector in Italy", published in the international journal Growth and Change in June 2011.
3) from 2011 to 2013: (i) studies on the growth of firm size and the phenomenon of high-growth firms in Italy; analysis (developed together with Alessandro Arrighetti) on the determinants of the probability that a company can be defined as a high-growth firm. (ii) studies on investments in intangible assets for manufacturing companies in Italy. The reference literature is that which considers the internal resources of manufacturing companies, with particular reference to intangible assets. Intangible assets can be like the stock of intangible assets that can be used in the production process of companies and is often necessary for the creation and sale of new products or processes. The essay (written with A. Arrighetti, and F. Landini) “Intangible Assets and Firms Heterogeneity: Evidence from Italy” was published in the Research Policy journal. Subsequently, another essay entitled "Intangible Asset Dynamics and Firm Behavior" (with A. Arrighetti, and F. Landini) was accepted for publication in Industry & Innovation magazine. Finally, in 2018 a third investigation called «Economic crisis and firm exit: do intangibles matter? »(Again with A. Arrighetti, and F. Landini) was published in Industry & Innovation.

4) from 2013 to 2018: (i) on the processes of size growth the essay "Assessing the determinants of fast-growth firms in Italy" was published in the "International Journal of the Economics of Business" in 2013; (ii) studies on the phenomenon of businesses run by immigrants or ethnic businesses. In particular, the research work focused on aspects such as the differences between native and migrant firms and also on the characteristics of the phenomenon defined as “acculturation”. In an applied research work (with A. Arrighetti and D. Bolzani) the variables that influence the phenomena of multicultural hybridism in entrepreneurial teams owned by immigrants were analyzed. The essay “Beyond the enclave? Break-outs into mainstream markets and multicultural hybridism in ethnic firms "(with A. Arrighetti and D. Bolzani) was published by the review “Entrepreneurship & Regional Development: An International Journal” in 2014. Appointed as Associate Professor (SECS -P/06 - Applied Economics) at the Department of Economics of the University of Parma (1 October 2014). Subsequently, through an original methodology and dataset, firms were classified, based on the structure of the Board of Directors, into 3 types: Italian, foreign (composed only of directors born in the same non-industrialized country) and hybrid (for which they are present directors of different nationalities and at least one director born in non-industrialized countries). The essay “Migrant entrepreneurship: differences in organizational models and performance", written with A. Arrighetti, G. Foresti and S. Fumagalli, was included in the IntesaSanpaolo series of Studies and Research in 2017. Finally, an in-depth study on the topic "acculturation” was represented by the essay “Acculturation and Ethnic Hybridism in Immigrant Entrepreneurship ”, written with A. Arrighetti and D. Bolzani, published in the journal Argomenti in 2017.

During the transitional period of the emergency management of the COVID-19 epidemic, office hours will be organized "on line", through the Microsoft Teams platform adopted by our university.