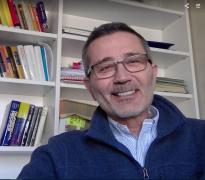 The teaching activity of Paolo Santini has been considerable from the start of his career. In Lausanne he was regularly in charge of exercises for several courses, and he taught the full courses “Complements of Analytical Mechanics” for one term, and “Advanced Theoretical Physics” for three terms. At the University of Parma, he taught several basic and advanced physics courses for the Physics Bachelor and Master degrees, for Material Sciences bachelor degree, and for the Food Sciences bachelor degree, He is president of the Physics Degrees Council since march 2016.

The research activity of Paolo Santini has been in the field of theoretical condensed matter physics, and it covered a wide range of problems: strongly correlated electron systems, magnetism in rare-earth and actinide compounds, low-dimensional systems such as spin chains, semiconductor surfaces and molecular nanomagnets. The purpose of this activity has been twofold: on the one hand, understanding fundamental physical phenomena, and on the other hand to identify materials suitable for technological applications, in particular quantum-information processing. He has established many long-lasting collaborations with experimental physics and chemistry groups in Italy and abroad, and he has participated in many neutron-scattering experiments in international facilities.

He is referee for many international journals.