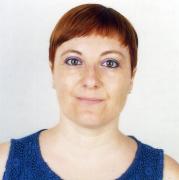 Cristina Carusi got her MA in Classics in 1999 from the University of Pisa. She is an alumna of the undergraduate program in Classics and the graduate program in Ancient History of the Scuola Normale Superiore, where she got her PhD in 2006. She held fellowships and research appointments at the Italian Archaeological School in Athens, the University of Parma, and the Center for Hellenic Studies (Washington, DC). She was Assistant Professor in the Department of Classics at the University of Texas at Austin (2013-2019), member of the School of Historical Studies at the Institute for Advanced Study in Princeton (2018-2019), and from 2019 she is Associate Professor of Greek History at the University of Parma.
She contributed to several national and international conferences and workshops and is the author of several articles in miscellaneous volumes and specialized journals. Among her publications, the monographs “Isole e Peree in Asia Minore. Contributi allo studio dei rapporti tra poleis insulari e territori continentali dipendenti” (Pisa 2003), “Il sale nel mondo greco (VI a.C. – III d.C.). Luoghi di produzione, circolazione commerciale, regimi di sfruttamento nel contesto del Mediterraneo antico” (Bari 2008), and the volume “Nuove ricerche sulla legge granaria ateniese del 374/3 a.C.” (Pisa 2010), edited with A. Magnetto and D. Erdas. She is currently working on a new monograph on the impact that large-scale public building projects had on the economy and society of Classical Athens and the complex relationship between public works and the Athenian democracy, whose title is “Public Building and the Athenian Democracy”.

The next office hour will be held on Monday, January 20th at 3:00pm - 4:00pm. Otherwise, you can ask for an appointment by writing to the instructor's email address (cristina.carusi@unipr.it).