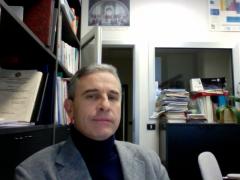 From 2014 he holds the teaching of Pharmacovigilance (1 CFU) within the School of Specialization in Hospital Pharmacy currently belonging to the Department of Food and Drug Sciences).

From academic year 2014/2015, first within the Department of Pharmacy and then in the Food and Drug Department, he was appointed delegate for outbound orientation and policies of connection with the world of work and job placement.

From 2009 to 2019 he was a member of the teaching staff of the PhD program in "Pharmaceutical sciences, biomolecules and health products" belonging to the Department of Food and Drug Sciences.
In the Institute of Pharmacology and Pharmacognosy he started to investigate the patho-physiology of the gastrointestinal tract focusing on the investigation of the role of the endogenous mediators histamine and acetylcholine in the control of motor and secretory processes. These studies also continued at the Department of Pharmacy and later at the Food and Drug Department.
Parallel work was devoted to the pharmacological characterization of new compounds developed as non steroid anti-inflammatory drugs in collaboration within labs of medicinal chemistry of different Italian universities. Subsequently this fruitful line of research was applied also to plants and plant extracts selected on the basis of folk herbal treatments. More recently, he has also been involved in studies aimed at characterizing the alterations of gastrointestinal motility associated with experimental Parkinson's models and on the study of the efrine system (and search for specific ligands), in order to investigate, also through the preparation of specific experimental models, the basic mechanisms associated with this system and investigate the efficacy of pharmacological interventions aimed at control of the functional alterations involved. Since 1995 member of the Italian Society of Pharmacology (SIF), is author of over 90 scientific articles and over 70 contributions to national/international congresses. He has been Scientific Coordinator of Local Unit within a 2003 COFIN project supported by grant.

Thursday and Friday from 15:30 to 17:30. Daily availability after contact by e-mail.

1) Characterization of anti-inflammatory/analgesic and antiplatelet/antithrombotic activity of new synthesized compounds or herbals and evaluation of gastrointestinal tolerability. 2) Study of original selective antagonists of the histamine H3 receptor a potential target for innovative therapies aimed to treat CNS disorders 3) Study of the patho-physiology of gastrointestinal tract associated to gastric acid-peptic dysfunctions, to intestinal ischemic/obstructive injuries and to dopaminergig nigrostriatal neurodegeneration (Parkinson’s experimental model) for the development of specific original pharmacological interventions aimed at controlling the consequent organic and functional disorders. 4) Study of the pharmacological modulation of intestinal inflammatory states (IBD: Inflammatory Bowel Diseases)) through specific experimental models that reproduce chronic inflammatory states of the intestine such as Crohn's disease and ulcerative colitis. 5) Study of the ephrine system (Eph-ephrin) and research of specific ligands, in order to investigate, also through the preparation of specific experimental models, the pharmacological interference with the bidirectional signaling supported by this family of tyrosine-kinase receptors that seems to play a significant role in different types of cancer.