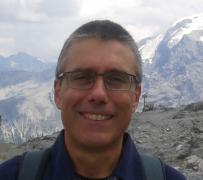 General and Inorganic Chemistry for the degree of Geological Sciences

Metallorganic Chemistry for the Masters of Industrial Chemistry and Chemistry

His research activity is mainly devoted to:

2) Synthesis and structural characterization of Metal-Organic-Frameworks (MOF) for the ncapsulation and controlled release of active substances, mainly antobacterial agents

3) Use of lignin for the preparation of environmentally sustainable pesticides

The resarch is conducted in collaboration with Italian (University of Milan, University of Turin and University Milano-Bicocca) and foreign (Cape Town University) universities, as well as Italian and foreigh companies.

- Vice President of the Teaching Board of the Bachelor and Master Degrees in Chemistry, University of Parma

- Delegate of the University of Parma in the scientific council of the Interuniversity Consortium of Chemical Reactivity and Catalysis (C.I.R.C.C.)

My office is always open. Please contact me by email or phone for office hours.

Delegate of the University of Parma in the scientific Council of Interuniversity Consortium of Chemical Reactivity and Catalysis (C.I.R.C.C.)

I am keen on trout fishing

Preparation of porous material deriving from the combination of metal ions and polytopic organic linkers for the selective and reversible uptake of gases and organic liquids. Particular emphasis is given to the uptake of environmental important gases, such as carbon dioxide, and natural essential oils, such as phenol derivatives (eugenol, carvacrol, thymol etc.). A second research line deals with the functionalization of lignin with metal species for agrochemical and zootechnical applications.

Research contracts fundede by Green Innovation GMBH (Austria) and UPM-Kymmene (Finland) for the development of natural polyphenols for agrochemical and zootechnical applications.