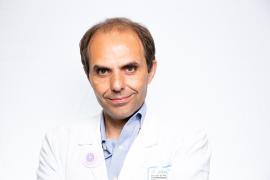 Born in Reggio Calabria on July 24, 1975; he lives in Parma. Married with two daughters.

Antonino Musolino is Associate Professor of Medical Oncology at the University of Parma, Italy. He is also Head of the Breast Unit, University Hospital of Parma.

His initial medical training was in Messina, Italy. Then, he moved to the University Hospital of Parma for specialist training in Cancer Medicine and, later, to the University Hospital of Padua for specialist training in Hematology. He also spent some time in London at the Royal Marsden Hospital (Gastrointestinal Cancer and Lymphoma Units, Head: Prof. David Cunningham). He achieved the PhD in Pathophysiology in 2009 at the University of Parma and the Master of Science in Epidemiology in 2017 at the University of Turin. His principal clinical and research interests are breast cancer, lymphomas, cancer epidemiology and pharmacogenetics.

Over the past 15 years he has become increasingly involved in clinical trials, pharmacogenetics, and epidemiological studies focusing on individualized treatments for HER2-positive breast cancer. He is currently Principal Investigator for several international multicenter breast cancer trials involving in particular targeted therapies. He publishes and lectures extensively. He was awarded the American Association for Cancer Research (AACR) Scholar-in-Training Award in recognition of promising cancer research at the 2007 AACR annual meeting and Elsevier Recognized Reviewer from 2016 to 2020.

To request an appointment, please send an email to: antonino.musolino@unipr.it