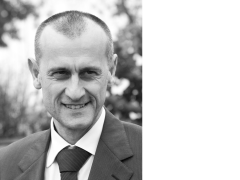 Cristiano Viappiani graduated in Physics ( 110 cum laude, 1988) and received his PhD in Physics (1992) from the University of Parma. Researcher since 1993, Associate Professor since 2002, since December 2015 is Full Professor of Applied Physics SSD FIS/07, SC 02/D1, at the Department of Mathematical, Physical and Computer Sciences, University of Parma. CV has taught at the University of Parma, in specialist schools and abroad (Erasmus LLP). Member of the Doctoral Studies Committee in Physics since 2000, he has been nominated Chair of the Committee in 2014. He is director of the Doctoral School in Science and Technology. CV is President of Comitato Scientifico di Area Scienze Fisiche (Comitato 02) and Coordinator of the Physics Unit within the Department of Mathematical, Physical and Computer Sciences.

CV conducts research in collaboration with several Italian and foreign research groups ( SA, Germany, UK , Belgium, Spain , Argentina). Since 1991, CV has been a member of the American Biophysical Society. He is a member of the European Society for Photobiology (ESP). Since 2016, he is president of the Italian Society for Pure and Applied Biophysics (SIBPA).

CV has participated as a national or local project coordinator in several research projects funded by MIUR, CNR, INFM, CRUI - DAAD and Ministry of Foreign Affairs.

The research of CV has been focused on the development and application of techniques based on nanosecond pulsed laser for the characterization of structural and functional dynamics of proteins and photoinduced processes in photosensitive molecules.

CV has presented over 100 communications at national and international conferences, where he held several invited talks. The research has resulted in over 120 publications including articles in international scientific journals and book chapters. As of February 27, 2018 Scopus reports 119 items that have received 2246 citations, with an average number of citations per publication of 18.9, resulting in an h index of 27.

CV is part of the Editorial Board of Phochemical and Photobiological Sciences ( Royal Chemical Society) and Scientific Reports, and acts as a referee for several international scientific journals ( JACS Biophys. J. , PLoS ONE, ... )