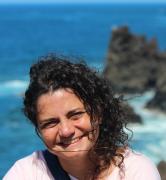 Her research interests are in the field of artificial intelligence, mainly in the study of visual sensors unconventional vision algorithms for autonomous systems and application of video surveillance. More recently, the research also covered the issues of information extraction from distributed multimedia databases, applications for the semantic web and the design and implementation of an ontology devised to extract knowledge from smart environment.