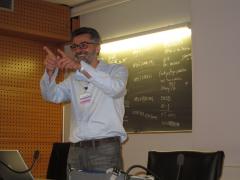 Francesco Di Renzo is associate professor of Theoretical Physics at the Department of Mathematical, Physical and Computer Sciences of the University of Parma.

He has been a member of the Doctoral Studies Committee in Physics since 2000. He is currently supervisor of 3 PhD students.

He holds a research appointment (incarico di ricerca) from the National Institute of Nuclear Physics (INFN). After being the scientific coordinator of the Research Project (i.s.) MI11 (Lattice Field Theory and Computational Particle Physics) for many years, he is currently the local coordinator of the i.s. QCDLAT.

He has participated in three projects funded within PRIN programs, twice holding the role of scientific coordinator of research unit.

Part of his research activities are dedicated to the development of new high-performance computing architectures. He was a member of the apeNEXT collaboration and of INFN SUMA (SUper MAssive computing project); he has been scientific coordinator for INFN of the AuroScience project. He is Italian representative on the board of the International Lattice Data Grid and of the ILGD board he has been chairman for two years. He is currently a member of the scientific committee of the UNIPR high-performance computing service.

His main research interests are in the physics of fundamental interactions, and in particular in the lattice formulation of quantum field theories. He has great interest in computational physics, from the more traditional algorithmic aspects up to the most recent applications of artificial intelligence techniques to theoretical physics.

Upon agreement (via e-mail)