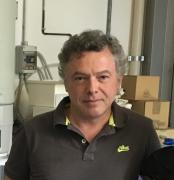 Roberto Menozzi was born in Genova, Italy, in 1963. He received the Laurea degree (cum laude) in electronic engineering from the University of Bologna, Italy, in 1987, and the Ph.D. degree in information technology from the University of Parma, Italy, in 1994. After serving in the army, he joined a research group at the Department of Electronics (DEIS), University of Bologna. From 1990 to 2016, he has been with the Department of Information Technology, University of Parma, where he became Assistant Professor in 1993, Associate Professor in 1998, and Full Professor in 2006. Since 2017, he is with the Department of Engineering and Architecture of the University of Parma.
He spent research leaves with the Cardiff University, UK, in summer 1991, the University of Michigan, Ann Arbor, MI, in fall 1992, and the University of Colorado, Boulder, CO, in spring 1997. On sabbatical leave for the academic year 2003/04, he spent 9 months working with M/A-COM, Lowell, MA, USA, on HBT large-signal modeling, power amplifier thermal characterization, and the development of new thermal resistance extraction techniques. On a six-month leave from the University of Parma from July to December 2006, he has worked with the Microelectronic Research Group, School of Electrical, Electronic and Computer Engineering, University of Western Australia, on GaN device characterization and modeling, under the Gledden Fellowship program.
His research activity has covered the fields of CMOS latch-up and automated IC testing and compound semiconductor and heterostructure device characterization, simulation and reliability evaluation. He has been mostly concerned with hot electron issues in heterostructure devices on GaAs and InP such as HEMTs and HFETs, and with thermal characterization and modeling of semiconductor devices and circuits. Recent activities have mostly focused on the numerical simulation of thin-film solar cells, and specifically on CIGS technology. On these topics, he has published over 180 papers in refereed international journals and international conference proceedings.
More specifically, the research interests pursued are, in a roughly chronological order: Experimental and numerical study of latch-up in CMOS integrated circuits; Automatic testing of integrated circuits; Development of a new technique for the extraction of the parasitic resistances of GaAs MESFETs; High-frequency noise characterization of MESFETs and HEMTs; Characterization of temperature-accelerated degradation mechanisms of GaAs heterojunction devices (HEMTs and HBTs); Small-signal model optimization based on Genetic Algorithms; Numerical simulation and characterization of power p-i-n diodes for soft-switching in snubber-less applications; Hot electrons, impact ionization and breakdown in heterojunction FETs (HEMTs and HFETs), and their reliability implications; Thermal modeling of semiconductor devices and circuits, and development of new techniques for the extraction of the thermal resistance and junction temperature of HBTs, LDMOSFETs and PHEMTs; GaN device characterization and modeling; Modeling of thin-film solar cells.
He cooperates as a reviewer with the IEEE Transactions on Electron Devices, IEEE Electron Device Letters, IEEE Transactions on Device and Materials Reliability, IEEE Microwave and Wireless Components Letters, IEEE Transactions on Instrumentation and Measurements, IEE Electronics Letters, IEE Proceedings on Circuits, Devices & Systems, Semiconductor Science and Technology, Microelectronics Reliability, and Solid-State Electronics, and he has been a committee member for the IEEE Int. Reliability Physics Symp. (IRPS), the European Symp. on Reliability of Electron Devices (ESREF), the EIA-JEDEC Reliability of Compound Semiconductors (ROCS) Workshop, and the Conference on Optoelectronic and Microelectronic Materials and Devices (COMMAD). From 2007 to 2012, he has been a member of the Editorial Board of Elsevier's Microelectronics Reliability, of which he has served as Associate Editor from 2012 to 2017.
He gave invited talks on his research activity at the University of Central Florida, Orlando, FL (1996), TRW, Redondo Beach, CA (1997), Jet Propulsion Lab., Pasadena, CA (1997), Fraunhofer Institut IAF, Freiburg, Germany (2000), Ericsson Lab Italy, Milano, Italy (2001), M/A-COM, Lowell, MA (2003), BAE Systems, Nashua, NH (2004), Northrop Grumman Space Technology, Redondo Beach, CA (2004), Skyworks Solutions Inc., Newbury Park, CA (2004), Raytheon, Andover, MA (2004), the University of New South Wales, Sydney, NSW (2006), the University of Western Australia, Perth, WA (2006), IMEP/LETI, Grenoble, France (2007), and as an Australian Research Council Nanotechnology Network’s Distinguished Lecturer , at the Royal Melbourne Institute of Technology, Melbourne, Australia (2008), Australian National University, Canberra, Australia (2008), Defence Science and technology Organization, Edinburgh, Australia (2008), University of Adelaide, Adelaide, Australia (2008), Ferdinand-Braun-Institut, Berlin, Germany (2018).
Roberto Menozzi is a Senior Member of the IEEE.