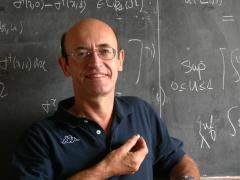 I studied with Sergio Spagnolo and Ennio De Giorgi, and I always worked in Calculus of Variations. The number of my scientific papers is not large (less than 50) but most are heavily cited; at least three fell in the top cited list of the analysis papers (i.e., the top 1%).
My research may be divided in five branches: existence and regularity of minimizers of variational integrals (1), dimension reduction problems in elasticity (2), problems with non standard growth (3), isoperimetric problems (4), relaxation of geometric functionals (5). The papers in group (1), almost all of which are in collaboration with Nicola Fusco (Naples), contain some fundamental results for the theme. Those in group (2), mainly in collaboration with Giuseppe Buttazzo (Pisa), provided the mathematical foundation for the approximation in energy (and not merely through a formal asymptotic development) of the equations of plates, membranes and strings starting from 3D linear or nonlinear elasticity. Group (3), in collaboration with Giuseppe Mingione, opened a new research sector, developing the new essential tools and showing the fundamental results to study energies whose growth may depend on position (e.g. electrorheological fluids); group (4) is quite recent and deals with nonlocal problems of isoperimetric type: among the byproducts, a proof of the minimality of certain configurations of dyblock copolymers, and the first known instance of geometric flow in H-1/2 for nonlocal functionals of isoperimetric type. Finally group (5) deals with non semicontinuous energies defined on curves (and hopefully on surfaces) containing both length (or area) and curvature terms.

All my papers may be found on my web page http://calcvar.unipr.it/acerbi.html

Rest of the jear: always available when in my office, else by appointment (e-mail)

Scientific Coordinator of the Mathematics and Computer Science Unit

Coordinator of the CORDA Project