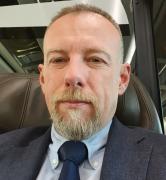 Prof. Marcello Vanali
Associate Professor in Mechanical Measurements since August 2011
Born in Varese July 17, 1970 and is based in Milano in Via Luigi Porro Lambertenghi 28;
Graduated in mechanical engineering from the Polytechnic of Milan, February 19, 1998, bringing a vote of 95/100 with thesis "Dynamic characterization of a not metallic fiber-optic cable (ADSS)"; (Prof. M. Falco);
Doctor of Philosophy in Applied Mechanics on 27/02/2003 with a thesis entitled "Analytical study experimental vibro-acoustic impact generated by the transit of trains in urban areas"
Assistant professor of mechanical and thermal measurements from May 1, 2002 to 31/07/2011 at the Department of Mechanical Engineering at Politecnico di Milano
Associate professor at “Dipartimento di Ingegneria e Architettura”, University of Parma since 01/08/2011, confirmed in 2014.
Applied for the ASN 2016, full professor position in ING/IND-12, having all three required threshold cleared 8 titles out of 10 (Required 3), Approved.
Supervisor of a number of PhD and graduate student during his career and he set-up the mechanical measurement group in Parma since there were no professors in the subject at the time of his arrival.
Actually the president of the “Consiglio di Corso di Studi per il funzionamento della Laurea Magistrale in Ingegneria Meccanica” at University of Parma, Director of the course
Member of the PhD Course board in Parma
Reviewer for a number of international journal like "Mechanical Systems and Signal Processing" (MSSP), JASA, JSV etc….;
Associated editor for Shock & Vibration;
Member of the Society for Experimental Mechanics (SEM), both in "Sensors and Instrumentation" and “civil structures” technical committee.

Scientific activity
A summary of the scientific breakthrough for lines of research, oriented towards their subjects of Mechanical and Thermal Measurement and experimental aspects of Applied Mechanics is reported:
a) fluid structure interaction: as part of this research I collaborated to conduct a series of test campaigns with the aim of characterizing the forces acting on bodies immersed in fluids in motion, studied innovative methods of measurement and signal processing in order to identify the parameters needed for the subsequent numerical modelling. Especially I took part in the following research / experimental tests:
• Development of methods for the characterization of damping of electrical cables and optical fibers both in the laboratory and in the field.
• Measurements of damping and numerical calculations to characterize the behavior of the Millenium Wheel (British Airways London Eye) cables.
• Tests for the characterization of the vortex shedding phenomenon on cables immersed in water, influence of current and waves.
• Characterization of the forces acting on submerged bridge decks (research in collaboration with the Department of Hydraulics of the Milan Polytechnic).
• Analysis of the dynamic behavior of damping devices for conductors, research project funded under the “young researchers” funding.
b) Comfort and safety of railway vehicles: in the context of this research the undersigned has participated in the development of measurement methods and models for analyzing the behavior of railway vehicles from the point of view of safety and driving comfort.
c) Train structure interaction: in this context I participated in the development of test methods for the characterization of the behavior of different superstructures used in subway lines in terms of the transmission of vibration and fatigue behavior.
d) Acoustic: as part of this research I participated in a research project (HIPERTRACK) for the development of a European railway superstructure for high-speed trains with low vibro-acoustic impact. In this research I focussed on the development of sound source localization techniques and on the study of train wheels acoustic behaviour.
e) Structural monitoring: main focus is on the developing of measurement systems and measurement techniques for the health monitoring of civil and mechanical structures. As a part of this research it is worth citing the permanent monitoring of San Siro Stadium in Milano, the Duomo in Milano and Palazzo Lombardia in Milano.
f) Developing of micro-electromechanical sensors (MEMS): in this area I participated in the development of measurement methods for the kinematic characterization of MEMS devices.. The activity was carried out in collaboration with ST Micro-electronics.
g) Human structure interaction: I took part in many field tests concerning dynamic testing and vibration serviceability issues of civil structures (stairs, passageways, highway flyovers etc…). The activity lead to the development of a load model able to predict in service vibrations taking into account all the passive and active people effects.
h) Collaboration with Pirelli Tyre in order to set-up an automatic diagnostic system for tyre fatigue testing machines (patent demanded)
i) Collaboration with Leonardo Elicotteri in order to estimate acoustics power flows across the main helicopter fuselage

By appointment, via e-mail.