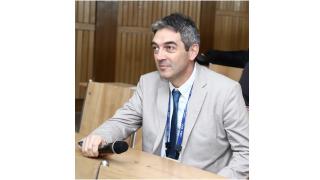 He now teaches Guided Propagation for the Laurea curricula in Electronics and Telecommunications Engineering, the Microwaves and Photonic Components courses for the Master Science curricula in Electronics and Telecommunications Engineering, and Electromagnetic Fields at the Medicine and Surgery Faculty, Parma University. In the past years he also served as assistant professor in other universities.

The theoretical approach, other than on analytical methods, was mainly based on the development of numerical methods, first of all the Finite Element Method (FEM). This has been developed thoroughly for years, leading to the implementation of codes of extremely general purpose, that is, suitable for the study of guiding structures with arbitrary geometry, distribution or refractive index variation and media features. For modal analysis, mono- and bi-dimensional codes were developed which are suitable for media that can also be anisotropic and nonlinear, both with and without losses. Both scalar and full-vector formulations were developed. The electromagnetic propagation analysis, started with the development of the Beam Propagation Method with scalar mono-dimensional codes, has been subsequently generalized to obtain bi-dimensional cross-section full-vector codes. Moreover, formulations of propagators for Finite-Element Time-Domain and Finite-Element Frequency-Domain analysis were also implemented. Part of this research was pursued also in the frame of the Bilateral Agreement on “Modelling of novel photonic components for telecommunications” between Italy and Czech Republic.

For what pertains the study of optical amplifiers, starting from erbium-doped ones suitable for amplification in the C band, he has subsequently extended the analysis to S and L bands. For this study, efficient codes were developed employing the so-called spectral and spatial amplifiers formulations which implement the propagation and population rate equations, also integrated with finite elements modal solvers, when an accurate knowledge of the pump and signal field distribution is required. This theoretical study and simulation activity has always been joined to an intense laboratory activity aiming to characterize the doped fibers and to experimentally verify the performance of the optical amplifiers subject of the study. The activity has been also extended to the analysis of fiber lasers for single channel emission as well as for WDM applications. Over the years, this research was pursued in the frame of the Fluoroaluminate Amplifiers for Second Telecom window – Fast (ACTS – EU Program) and Large Optical Bandwidth by amplifier Systems based on TEllurite fibers doped with Rare earths – LOBSTER (IST – EU Program) European Projects.

During the last years, intense laboratory work was devoted to the successful construction of a new scanning near-field optical microscope, for the study of the near field emitted by standard and micro-structured fibers. The pixel-by-pixel measurement of the fiber emitted field allows the acquisition of its image, that, after processing, gives interesting information on the propagating field properties.

Between 2004 and 2007 he has been involved in the study of Radio over Fiber technologies aimed to extend the radio cellular coverage, particularly suitable for a multi-operator and multi-band scenario. This activity has been performed in partnership with another university in Italy and leader companies in the field and supported by the Regional Government of Emilia-Romagna in Italy within the frame of the INSEBALA Project . In 2007 he also coordinated the PREMIA Project aimed to develop solutions for multiple operators and low environmental impact base stations for cellular phone networks, supported by the Regional Government of Sicily, Italy.
In the same year, he established a new academic spin-off, called Net Integra Consulting, devoted to provide RF services, measurements and consultations for wireless operators and customers.
Exploiting funding still provided by the Regional Government of Emilia-Romagna through different technological projects and the development of the TECAL Laboratory Project, he supported and coordinated more than 130 men-months between 2003 and 2010 in RF activities as well as on optics and photonic themes as illustrated below.

The scientific activity is now mainly focused on the study of photonic crystal and microstructured optical fibers and fiber based lasers. The research activity is performed in partnership with several European research centres and in the frame of different projects. The study is mainly concerned with the dispersion, amplification and nonlinear properties, in terms of their possible applications. In particular he has been, or is, involved in the following European projects: COST Action P11 - Physics of linear, nonlinear and active photonic crystals, COST Action 299 - Optical Fibres for New Challenges Facing the Information Society, COST Action MP0702 - Towards functional sub-wavelength photonic structures and the Bilateral Agreement “Design of passive devices based on microstructured fibers for optical communication systems” between Italy and Pakistan.
On the subject of dispersion, efforts were devoted to the design of fibers with very high negative dispersion, suitable for dispersion compensation, and with flat dispersion on the whole third telecommunications window. The study of optical amplification phenomena was instead aimed at the design of fibers capable of maximizing the overlap between doping material and field distributions, with the purpose of optimizing the efficiency of photonic-crystal fiber based amplifiers. Within this subject, other mechanisms of optical amplification have also been studied which are based on nonlinear effects, such as Raman amplification and the parametric one, which is of special interest in non-standard transmission bands.

Prof. Stefano Selleri is now the Coordinator of the three year Large-scale Integrating project “ALPINE - Advanced Lasers for Photovoltaic INdustrial processing Enhancement” funded by the European Community within the FP7 Program, Theme 4: Nanosciences, Nanotechnologies, Materials and New Production Technologies, http://www.project-alpine.eu.
ALPINE aims to push forward the European research and development of fiber laser systems for the scribing of photovoltaic modules, joining together two exciting challenges: the fiber laser development for advanced industrial processing, on one side, and solar energy exploitation, on the other side. The project consortium is made by fifteen partners from all over Europe and is focused on a new high brilliance and high beam quality laser based on photonic crystal fibers. The novel laser system will be designed to fit the requirements for scribing innovative and flexible thin-film solar cells based on CdTe and CIS or CIGS technologies.
Prof. Stefano Selleri is also the Coordinator of the project "PUlsed fiber laser for MAterial processing - PUMA", of the Scientific and Technological Cooperation Program between Italy and French Community of Belgium, 2009-2010.

During the last year he has been also involved in research activities regarding optical sensing. Two themes were thoroughly studied: the usage of hollow core photonic crystal fiber as sensing element for biological applications, especially for the hybridization of the DNA chains and the usage of fiber Bragg grating based systems to monitor and control temperature in tunnel and civil infrastructures. This latter work has been supported by the Regional Government of Sicily in Italy within the frame of the “Intelligent Infrastructures” project, performed along with leader companies in Italy working in the field, and the “Development of new all-fiber lasers, for telecom, sensors and industrial applications” project in the frame of Italy-Spain Integrated Actions for 2009-2010.

The outcomes of all the activities described are clearly shown by the many international publications authored by prof. Stefano Selleri on the different subjects and can be view at http://gaem.tlc.unipr.it. In particular, he is author of more than one hundred and seventy papers published on established international journals and presented to the main international conferences in the field. He is also author of more than seventy national journal or conference papers.

Prof. Stefano Selleri is co-author of the research monographs “Photonic Crystal Fiber, Properties and Applications”, edited by Springer and is also author of important translation and writing of new textbooks at University level for students in electromagnetics and photonics, again visible on http://gaem.tlc.unipr.it.

He has been Tutor of many students for the MS degree and Tutor of many PhD students: M. Fuochi “Microstructured Fibers for Optical Devices and High-Power Delivery” (2005), A.H. Bouk “Electromagnetic Propagation in Photonic Crystal Optical Fibers and Waveguides” (2005), F. Poli “Photonic Crystal Fibers: Design, Applications and Perspectives” (2006), L. Rosa “Radio-Over-Fiber System Technologies” (2007), M. Foroni “Fantasies using optical fibers” (2008), D. Passaro “The bright future of optical fibers beyond telecommunications” (2010) and Michele Sozzi and Alessandro Candiani now attending respectively the second and third year of their PhD course.
He has been member of many commissions for MS and PhD degree, in Italy and abroad.