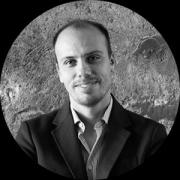 Fabrizio Moroni is a mechanical engineer. Fabrizio earned the Master’s Degree in Mechanical Engineering in 2006 (110/110 cum laude) at the University of Parma with a thesis entitled “Fracture and fatigue properties of structural epoxy adhesives”. From 01/2007 to 12/2009, he attended the Ph.D. course in Industrial Engineering at the Industrial Engineering Department of the University of Parma. He obtained the Ph.D. title with a thesis entitled "Testing and modeling of the strength of structural hybrid joints". During his Ph.D. course, he spent three months at the Henkel Research and Development Centre, located in Munich, dealing with testing and modelling of bonded and hybrid-bonded joints. From 2010 to 2015, he worked as research fellow at the SITEA.PARMA Interdepartmental Center. The research was focused on the development and design of innovative joining technique for the food industry machinery.

The strong collaboration with Henkel Italia and several food industry machinery manufacturers, leads to the establishment of the “Bonded Joint Manufacturing and Testing Laboratory” within the Laboratories of the Industrial Engineering Department of the University of Parma.

In 2014, within the SIR program, he applied for a 3 years grant for the project “SIMAB - Strength Improvement of Multimaterial Adhesively Bonded Joint”. The project was approved and funded by MIUR. The project deals with the development of surface treatments for the adhesion promotion in bonded joints. In particular, the project is addressed to the study of the mechanical connections within the food machinery. Since November 2015, Fabrizio is an assistant professor at the Engineering and Architecture Department of the University of Parma.

He has been supervisor of more than 30 students for their bachelor and master degree thesis. The main topics have been: experimental tests on bonded joints (quasi static, fatigue, fracture), experimental tests on hybrid joints (quasi static), Finite element analysis of mechanical components, crack growth simulation in aeronautics reinforced panels.

He also took part to other important industrial research projects with:

His main research interests are:

The result of his research have been published in